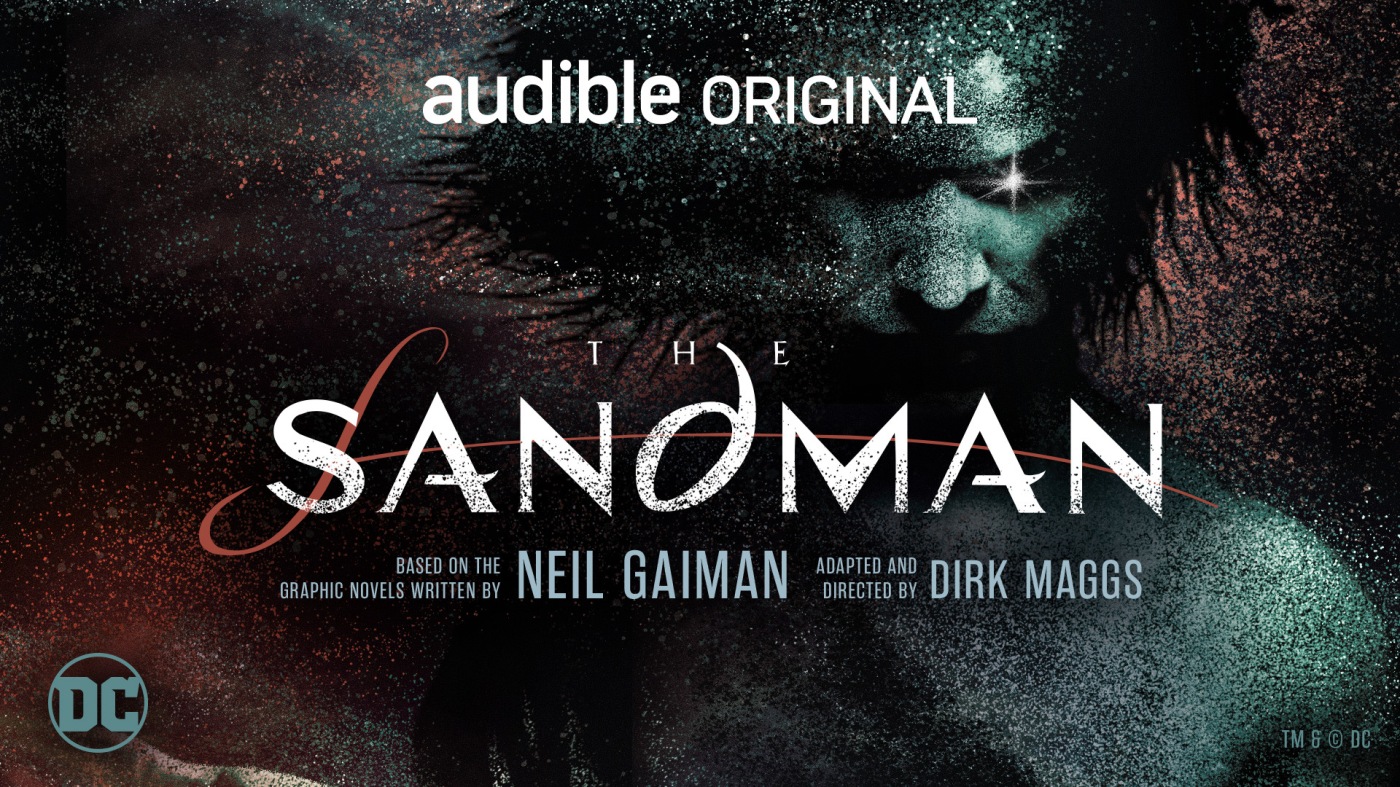 It has been over thirty years since the game changer that was The Sandman first hit the shelves of comic book stores the world over, the brainchild of fantasy maestro Neil Gaiman. Is it any wonder, then, that an audio adaptation is nothing short of spectacular?

Prior to 1989 only those who were versed in their Greek myths would have any idea who Morpheus is, and even at that he would be considered relatively obscure. Enter Neil Gaiman, who took the Lord of Dreams and catapulted him to stardom with a seminal, award-winning run of comic books which to this day captures the imagination of readers the world over. Testament to its popularity a live-action adaptation is currently in the works at Netflix, who are toting the fact that it will be their most expensive series to date. In the interim, however, Audible have treated us to the first in a series of audio dramas which will each adapt a handful of volumes from the now thirty-year-old odyssey.

Surprising no one, the subsidiary of Amazon have continued their streak of Audible Original dramas being the benchmark in the realm of auditory entertainment. Presided over by the phenomenal Dirk Maggs, who by now has an impressive list of directorial credits under his belt, a huge cast of A-list actors have come together to bring this tale of revenge and turmoil to life in the most magical way possible.

Fittingly narrated by Gaiman himself, we follow the story of Morpheus after being imprisoned for the span of a human lifetime in a glass cage by power-hungry cultists. James McAvoy slips effortlessly into the starring role, conveying the pain of suffering, the rage of vengeance and the soft touch of compassion sometimes all in the same scene in a way that is reminiscent of his role in the 2016 film Split and its sequel, Glass. This is made all the more impressive when it is taken into consideration that he was force to record all of his lines in isolation, directed by Maggs via video call. Such is the skill of both director and actor that this fact would go unnoticed to the uninformed, particularly during the touching scenes between Morpheus and his sister, Death, who is played by Kat Dennings.

Joining our pair of anthropomorphised abstract concepts are stellar performances by Riz Ahmed, Aaron Egerton, Samantha Morton, Andy Serkis, Michael Sheen, and a legion of others too numerous to mention by name. While McAvoy is present for the majority of the tale, other actors drift in and out of the narrative as minor and side characters who weave a web which ultimately culminates in a character study of an entity who has existed since the dawn of creation. As Death states towards the end of the production, when the last life in the universe has been snuffed out she will put the metaphorical chairs up on the table and lock the door behind her. For Morpheus, for the eponymous Sandman whose name is said in hushed whispers, he needs something to fill his time until that happens.

After the first hour-long chapter, when Morpheus has finally regained his freedom, a mission is undertaken to retrieve his treasured possessions which have since fallen into the hands of demons, deranged escapees of Arkham Asylum, and former associates of supernatural superhero John Constantine. Make no mistake, however; while this story inhabits the world of DC, its comic book roots only briefly raise its head to facilitate certain aspects of the narrative before it races down a very different path. Having said that, fans of fantasy who have never read a comic book in their life can still pick up their earphones and enjoy this drama safe in the knowledge that any necessary context is provided within the narrative and that it is very much self-contained.

At the same time, being self-contained does not leave the narrative constrained in any way. Originating in a solely visual medium, some would question the validity of an adaptation which does the opposite and foregoes visual cues entirely. These concerns are alleviated very early on, as not only are the flawless performances accompanied by a guiding narration from the original creator, but also by pitch-perfect sound effects and foley artistry. From creaky doors to taunting eyeball-chewing courtesy of The Corinthian to the perfectly-orchestrated introductions at the beginning of each chapter, every second is a joy to listen to as a world is built around our keen ears.

Spinning out of the main narrative are a number of side stories which at first appear meandering and pointless before eventually coming full-circle and revealing more layers to the Morpheus figure, the most enjoyable of which is the centenary visits to a London pub with a man who was given immortality many centuries ago.

Although it is unclear how many more instalments are planned in this series of adaptations, if the eventual sequels are even half as entertaining and enthralling as this first foray into the dreamscape then fans of the source material are in for a treat. With Dirk Maggs at the helm and Neil Gaiman himself being ever-present in the production, the future escapades of Morpheus are only going to get stranger, increasingly more distressing, and ultimately more touching and satisfying. With his many awards speaking for themselves, this venture could easily result in a lasting voice acting legacy for James McAvoy in the title role.

The Sandman hits the ground running with an opening chapter that introduces listeners to the world these characters inhabits and then never slows down. From cultist manor houses to serial killer conventions and from medieval England to the depths of Hell itself, this is one odyssey which is worth sticking around for until the end.