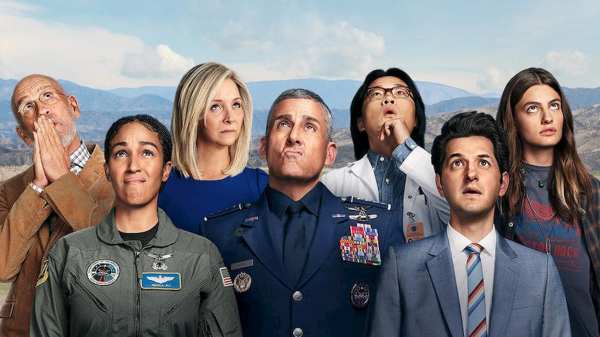 As the latest sitcom rockets to our screens courtesy of Netflix, turbo-charged with awkward hilarity and jokes of the meta variety, does Space Force live up to the expectations placed on the shoulders of its stars and creator?

Thankfully, yes. Ordered to series by Netflix only half a year after the real-life US Department of Defense was given the order to begin the process of establishing the sixth branch of the American armed forces, many feared that by the time the show actually arrived for public consumption it would be too little too late, the novelty of such a show having worn off. What actually happened, however, is the reunion team-up of Steve Carrell and The Office (US) creator Greg Daniels birthed yet another hilarious sitcom which does not need to rely on a laugh track, instead getting by on tight scripts and perfect comedic timing.

Starting with the premise itself, the show’s number one goal from its inception was to be a parody of a certain president’s vision for the armed forces. Right off the bat, Space Force could very easily have fallen into the trap of making parody its top priority, banking on meta-humour and satirical jabs at the real-life military to elicit laughs from its audience.

To be clear, it does do that. A lot. But also woven throughout the show is a web of characters who bounce off each other and create compelling drama, to such an extent that Space Force itself becomes a vehicle for these characters to entertain us rather than the only trick in the show’s arsenal. By the end of the first season you start to really care about the hardships some of these characters are forced to endure and also become invested in a fledgling romance or two.

The most prominent of these characters are far and away General Mark Naird and Dr. Adrian Mallory, portrayed by Steve Carell and John Malkovich, respectively. The pairing of an out-of-his-depth four-star general and the chief scientist who knows his way around a space shuttle creates a funny dynamic when the latter trumps the former and a slew of touching moments when they both connect as equals.

With Lisa Kudrow as General Naird’s incarcerated wife relegated to essentially a guest-starring role, it is this veritable odd couple who become the star power of Space Force.

That is not to say that the cast of relative newcomers stand in the shadows of Carell and Malkovich; that assessment of the show could not be further from the truth. Jimmy Yang, Tawny Newsome and Diana Silvers round out the cast as a mix of space scientist, pilot, and rebellious teenage daughter who you find yourself rooting for at every opportunity.

Add in other veteran actors such as Ben Schwartz, Don Lake and Noah Emmerich, as well as hilarious cameos courtesy of Jane Lynch and Patrick Warburton and, well, suddenly the main draw of the show isn’t “Michael Scott in space” like many people might have expected.

The one drawback of the show’s fledgling first season is unfortunately its sometimes over-reliance on meta commentary. For every hilarious scene of a monkey attempting to repair a satellite there is perhaps one too many off-the-cuff remark about the president using Twitter.

For every instance of pitch-perfect comedic timing from Carell there is an overt stand-in for a real-life politician during a budget hearing which doesn’t even try to be subtle, right down to two-thirds of their initials.

In the moment these additions to the script are funny, but in the long-run they are the very aspects of the show that will unfortunately tie it down to a very specific period of time and make it feel dated to a later audience, something which was already a big risk due to the parodic nature of the show regarding the real Space Force in the first place. Nevertheless, an otherwise excellent first season and abrupt cliffhanger will leave fans of the show eagerly awaiting a second season, and a third…to infinity and beyond.